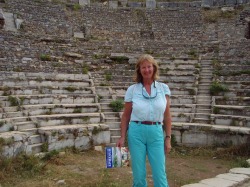 Faith Mortimer;  born in Manchester, England. Her childhood was spent on Royal Air Force camps around the Globe, kindling her lifelong enthusiasm for seeing new places and meeting new people.On returning home from boarding school (Kinloss House) in Singapore, she attended Purbrook Grammar School in Hampshire but there was never enough time for study; life was for reading, writing, painting, amateur dramatics and sport! She left school with a handful of ‘O’ levels but a wealth of interests.

Faith's love with books began at age 4. Early favourites were those by Enid Blyton with Faith joining the Famous Five and Secret Seven on their many adventures. This love for books still remains. The mysteries and secrets of novels dance around the edges of Faith's mind often keeping her awake into the long hours of the night.

Faith qualified as a Registered nurse and followed a career in healthcare up to the birth of her children; she became a full time mum until the outside world beckoned and she took up a new career. She set up and ran a busy agency covering the administration of a collection of travel-related companies. This led to a discovery for the passions for skiing and sailing and purchasing her first yacht with husband. Together, accompanied by their children, they spent the winters exploring the slopes of the European Alps and the summers around the coastal waters of England and France. At the same time Faith’s agency was running like clockwork and she found herself needing a new challenge. The children were away at University and she found their visits home exciting and intriguing as they related stories about life at 'Uni' and their degree work.

Faith decided she'd study for her own degree. Science! Apart from Biology and a passionate interest in Conservation and Ecology, science at school had been rather hazy - all that maths! But, this was a new challenge. Faith took the Science Foundation course and later completed the full disciplines of physics, chemistry, biology, geology and of course ecology. One of her proudest achievements to date is receiving her honours degree from the Open University chancellor in London.

Meantime, early retirement beckoned. A new yacht was bought; large and comfortable enough to live on almost full time. Faith upgraded her sailing skills, passing the Royal Yachting Association practical and written exams to become a Yachtmaster. In 2001, Faith and husband, Chris left the UK shores and sailed south to ‘hop’ across the Atlantic, spending the next three years exploring the Caribbean, the eastern coast of the USA and down south to Venezuela.

On board she thought, ‘If I can study for a degree whilst working full time or living on board a yacht in the Caribbean, it's about time I wrote that book I've always longed to write?’

A chance conversation with sailing friends about a true post-war incident, eighteen months of painstaking research and writing culminated in, The Crossing, her first novel; a story of loss and recovery set in a modern day sailing adventure , paralleled by a memory of love and the human spirit in overcoming the horrors of the 2nd World War. Faith so enjoyed the experience she immediately began her second novel The Assassins’ Village. This book, a murder -  mystery set on the island of Cyprus where Faith and Chris had spent a great part of their time. This book and all the others Faith has written are now available on Amazon in Kindle format, paperback and other leading eBook sites, including: Nook, Kobo, Apple and Google.

Writing still takes pride of place in a very full lifestyle which includes, walking, drama, reading, dancing and of course sailing whenever time permits.  Faith now writes in three genres: Murder Mystery, Psychological Thrillers and Edgy, Women's Fiction with more than a hint of romance. Her 19th book has been started!

Faith has read and listened to many others with advice about writing. Most of it so mixed and contradictory she has come to the conclusion that it is best to take the route where you feel most comfortable. Using your own initiative. Doing what you feel is right. What is writer’s block? Do other professions have the luxury to say they can’t perform their job because…? If Faith cannot write that day then she has a choice. To either groan and feel sorry for herself or get up and do something entirely different. Nine times out of ten the solution comes from an unexpected direction.

Mind you, writing is sometimes a lonely business and the love, understanding and support  of family and friends is vitally important in the process – at least it is for Faith!